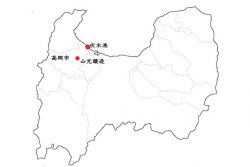 高岡市の位置。Location of Takaoka in Toyama. 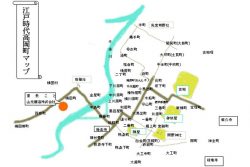 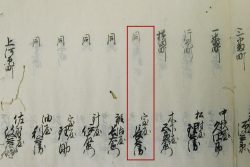 天保九年(1838年)高岡が災害に合ったときに義捐金を集めた際の徴収名簿 「分限帳」。Ancient document with the name of our ancestor “Muroya Chobei”.

In 1772, the mid of Edo era (the first year of Anei), our ancestor “Muroya Chobei” began running Koji (malted rice) business in Yokota-machi, Takaoka, Toyama. After that, “Muroya Chobei Shop” continued to produce and sell Koji and miso paste.
Yokota-machi located between farm village and city town and had good access to “Senbo River” and “Hokuriku main road”.

United States Declaration of Independence in 1776. YAMAGEN was born before USA!

In the late of Edo era, there might be many brewing food producers, 34 of Koji, 20 of soy sauce, 24 of miso paste and 11 of Japanese sake in Takaoka. This area has rich and clear water was suitable for brewing industry. Furthermore, the large cooker which made with Takaoka copper which is one of the most important industries in Takaoka was supporting the development of the brewing industry.

The humid climate through the year, thanks to a lot of snow in winter, is also important for good fermentation and brewing. 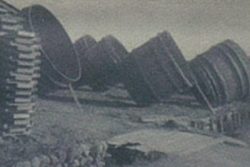 仕込み桶の天日干し風景。Soy sauce tanks dried in the sun beside Senbo river. 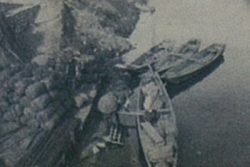 It was Taisho era (1918) when the sixth generation “Motojiro” began running soy sauce business.
Soy sauce production in Takaoka became a major business from the late of Edo era thanks to the transportation of “Kitamaebune*”. However, Takaoka had the heavy flood of Senbo river in 1896 and the big fire in 1900. Facilities of soy sauce production were all destroyed and soy sauce industry in Takaoka stopped.

*Kitamaebune: cargo ships that sailed the Japan sea, from Hokkaido to Kyushu.

Time passed and Japan won First Sino-Japanese War and Russo-Japanese War. Japan started to transport cheaper soybeans and salt from Asia continent using Fushiki port for landing.
In 1918, “Takaoka Soy Sauce Company” using imported materials was founded by 14 people including our ancestor Motojiro. This activity succeeded to reconstruct soy sauce industry in Takaoka.
After that, Motojiro left the company and started soy sauce production by himself.

Recovery of postwar and high economic growth period of Japan

After the war, the farm land and stock certificates of Manchuria railway were forfeited and Motojiro stopped business once. After the short time, the 7th generation “Hideo” was discharged from military service. For the reconstruction and restoring vitality to society, Motojiro and Hideo kept working hard. It was the period that people could get miso and soy sauce only with a coupon of a rationing system when Motojiro and Hideo reconstructed miso and soy sauce production business. In 1951, Muroya Chobei shop became  a joint stock corporation and changed its name: “Yamagen Jouzou Co., Ltd.

The logo of Yamagen has been used since Edo era. The upper part, like a mountain, means the roof of “Kojimuro”(a room for Koji fermentation) and the bottom part (元) means Koji itself. In Japanese, “Yama” means a mountain and “元” is pronounced “Gen”.

In 1960, new plant included 16 tanks with the capacity of 14.4kl.
”YAMAGEN MISO” and “YAMAGEN SHOYU” became popular in local liquor stores and retail stores, and gradually automatic machines were installed with increasing the demand.
The new product, “YAMAGEN SAUCE”, was developed at the same time, due to the expansion of western foods (“Omrice”, “Croquette”, “Tonkatsu”, e.t.c.) in Japanese life style.

Differentiation and return to local culture

With changes in the market environment, the price competition became fierce. The retail prices got going to down. The 8th generation “Mamoru” (current CEO) has focused on finding new markets and developing new items.

For example, selling at early-morning market in Niigata and Kansai (West of Japan) area and accompanying with wholesalers, etc.  Gradually, new marketing routes were developed, at the same time we directly picked up needs in each region and improved our own products. 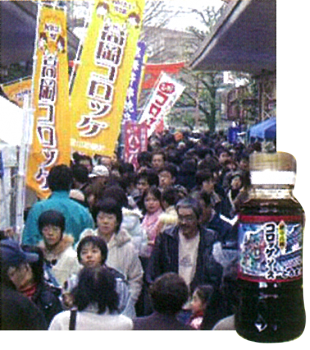 In Heisei era (1989-), the price of rice went up rapidly. We started to develop new products with additional value. Especially, focusing on the product development rooted in the region, we are promoting sales not only our products but also the goodness of our region, Takaoka, Toyama.

We hope you will honor us with your loyal patronage.